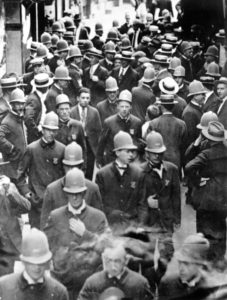 On September 9, 1919, more than 1,100 Boston Police officers went on strike for fair wages, decent working conditions and their right to organize.

Boston’s policemen were paid less than most of the city’s skilled laborers, and had not had a raise in decades. Normal shifts ranged from ten to thirteen hours. Required to be on call at the station house several nights a month, they slept in filthy quarters and were responsible for purchasing their uniforms and boots.

Police Commissioner Edwin Curtis disregarded the officers’ demands. He and Governor Calvin Coolidge were wary of the growing political power of immigrants and their elected officials. In their view, strikes threatened democracy. They were influenced by the era’s Red Scare, a hysteria fed by the belief that radical immigrants and labor unionists were trying to incite a revolution.

As the policemen planned to join the American Federation of Labor (AFL), Curtis prohibited police from joining any outside organization. The policemen voted to defy the order and join the AFL. On August 21, Curtis charged eight policemen with violating his ruling. On September 8, he suspended 11 more for a total of 19 leaders of the organizing effort. The next day, more than 1,100 policemen walked off the job.

Disorder in downtown Boston was almost instantaneous as people took advantage of the situation, looting stores and breaking windows. Boston’s Mayor Andrew Peters asked Governor Coolidge to call in the Massachusetts State Guard and local militia. When guardsmen fired into a crowd, killing five men, the violence began to subside.

Most Bostonians blamed the violence on the police for leaving the city defenseless, rather than on the lawless crowds or the aggressive response of the military. Curtis refused to rehire any strikers, but gave their replacements the pay increase they had been requesting for years. It would be nearly fifty years before Boston’s police were allowed to organize and the nation saw another police strike